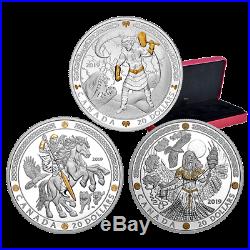 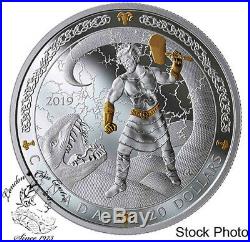 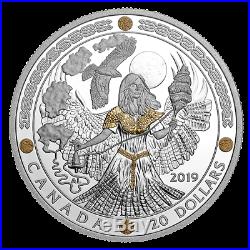 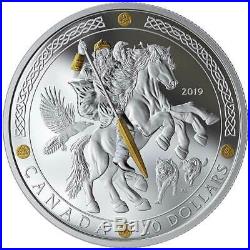 Norse mythology has influenced the way we tell stories and given rise to everyday words, including some days of the weekWednesday for Odin, Thursday for Thor, and Friday for Frigg. The Norse gods and giants are even part of Canadas multicultural heritage: theyre the folk heroes of Scandinavian Canadians who made their home all over Canada, in places such as Gimli, Manitoba, a community named for the heavenly hall of the righteous after Ragnarök. Your coins combine Norse art-inspired elements and a historic artefact frame both sides of each of your coins!

The use of selective gold plating on each of your coins draws your eye to important parts of your coin. The Royal Canadian Mint certifies all of its collector coins. Limited to 3,500 coins worldwide.

Each of your coins are crafted from one ounce of 99.99% pure silver. Norse mythology has influenced the way we tell stories, and given rise to some everyday words. Its tales of gods and giants represented tradition to the Vikings of Vinland, and folklore to Scandinavian settlers in Canada. Now, were combining history and myth in a limited series dedicated to the Norse gods, and it begins with the hammer-wielding thunder god: Thor. In the time of Canadas Viking Age c.

1000, quick-tempered Thor was one of the most admired figures of Norse faith and lore, and it is from him that we get the word Thursday (Thors Day). His strength and fearlessness are evident on your coin, where the apocalyptic battle scene is enhanced with selective gold plating.

A fun gift for someone who enjoys Thor and the Norse gods! A NEW THREE COIN SERIES! Thor is the first of three coins dedicated to powerful Norse gods. Your coin combines Norse art-inspired elements and a historic artefact frame both sides of your coin!

The use of selective gold plating on your coin draws your eye to Thors hammer, iron gloves, and strength-augmenting belt. A DYNAMIC MIX OF HISTORY AND MYTHOLOGY! Symbolic elements include a 10th-century silver pendant that represents Thors hammer. Your coin is crafted from one ounce of 99.99% pure silver.

Designed by Alexandra Lefort, your coin depicts the battle between Thor and Jörmungandr at Ragnarök, an end-of-days event in Norse mythology. Clad in the finest clothing and armour of the Viking era, the Norse god of thunder stands with his hammer raised, ready to strike the coiled serpent.

The gold-plated goat heads represent Tanngrisnir and Tanngnjóstr, who pull Thors chariot, while the gold-plated Mjöllnir is based on a 10th-century silver pendant. The obverse features the gold-plated effigy of Her Majesty Queen Elizabeth II by Susanna Blunt. Your coin is encapsulated and presented in a Royal Canadian Mint-branded clamshell with a black beauty box. Father of Thor and husband of Frigg, war-god Odin is the second of three Norse Gods featured in this series of coins, which explores Norse mythology and beliefs during Canadas Viking Age c.

Wednesday is named for Odin (or Wodan in Old English), the widely revered All-Father of the Norse pantheon. The long-bearded ruler of Asgard is the god of war and death, poetry and wisdomin fact, so great is Odins thirst for knowledge that he famously sacrificed his own eye to drink from the Well of Wisdom. Then order our stunning coin featuring Odin, the All-Father and Ruler of Asgard! PART OF A THREE COIN SERIES!

Odin is the second of three coins dedicated to the powerful Norse gods. Your coin combines both antiqued finish and selective gold plating on both sides.

Like a relic of the past, your coins antiqued finish mimics the appearance of an aged artefact! Selective gold plating highlights the spear, helmet, and two different symbols (the Valknut and the Triple Horn) of Odin on the reverse. Gold plating also highlights key elements along the rim, as well as the effigy on the obverse.

The reverse image by Alexandra Lefort finds Odin on his eight-legged horse, Sleipnir. One of Odins raven informants, Huginn (Thought), is perched on his shoulder while the other, Muninn (Memory), flies alongside him. His two wolf companions, Geri and Freki, also accompany him. Selective gold plating highlights Odins helmet, arm guard and infallible spear (Gungnir), as well as two different emblems associated with the Norse god of war and wisdom: the Valknut (knot of the fallen) and the Triple Horn of Odin. Our Norse Gods trilogy ends with Frigg, Odin's beloved and mother of Baldr, and the inspiration for the English word Friday.

A practitioner of Norse magic (seiðr), the Queen of the Æsir is the only other being who may sit upon Odin's high seat (Hliðskjálf) and look out at the cosmos. The goddess of family and fertility weaves the clouds and spins our fates. She knows the destiny of every being, but she will never reveal it.

Frigg wears a coat of falcon feathers that allows her to take to the skya feature that is highlighted in this selectively gold-plated tribute. Then order our stunning coin featuring Frigg, Queen of Æsir! Frigg is the last of three coins dedicated to the powerful Norse gods. Your coin has selective gold plating on both sides.

Selective gold plating highlights Frigg's belt and her feather shawl, which allows her to assume the shape of her falcon companion. Also gold-plated are the falcon emblem of Frigg and the mistletoe that is associated with the death of her son Baldr. The reverse image by Alexandra Lefort emphasizes Frigg's role as the Norse goddess of the sky. The Queen of Æsir holds a distaff in one hand and a spindle in the other, as she weaves the clouds that float towards the full moon. A Norse art-inspired pattern lines the rim on the antiqued obverse and reverse.

This item is in the category "Coins & Paper Money\Coins\ Canada\Commemorative". The seller is "bobafett6666" and is located in Yellowknife, Northwest Territories.

This item can be shipped worldwide.