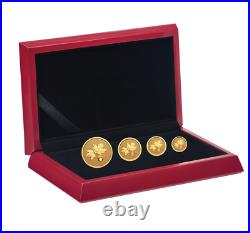 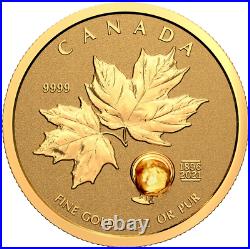 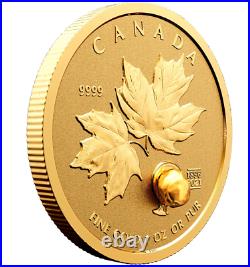 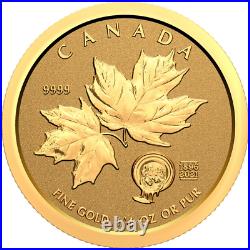 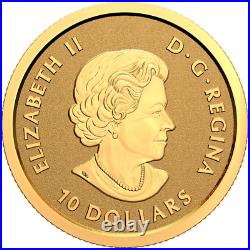 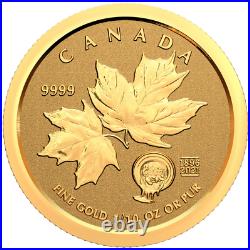 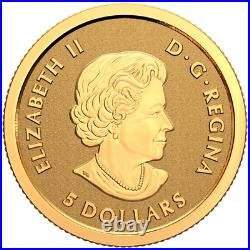 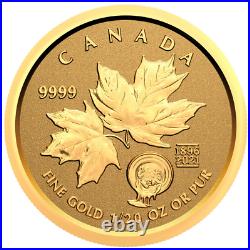 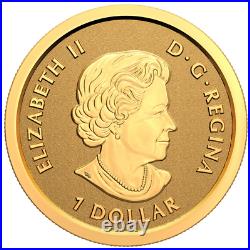 All 4 coins included in the set are 99.99% pure gold and feature two sugar maple leaves (Acer saccharum) that represent Canada. The obverse features the effigy of Her Majesty Queen Elizabeth II by artist, Susanna Blunt.

You're guaranteed a gold strike thanks to its 1 oz. Coin, which is topped with a genuine Canadian gold grain from the Royal Canadian Mint's world-class refinery. With its gold pan privy mark, each coin represents an important chapter in Canadian history.

And unlike the prospectors who made the arduous journey north to dig, sluice and pan for gold, this set offers you a gold-themed journey that's all reward and no risk. Continue your tradition of collecting pure gold fractional sets! Don't be disappointed, order yours today! Special features: A 125TH ANNIVERSARY: The 2021 gold fractional set celebrates the 125th anniversary of the Klondike Gold Rush by offering collectors their own little piece of Canadian gold.

STRIKE GOLD WITH THIS SET: The 1 oz. Coin is topped with a genuine Canadian gold grain from the Royal Canadian Mint's world-class refinery. SPECIAL PRIVY MARK: Along with the dates "1896" and "2021", a small engraved gold pan represents history on each of the four coins. SHINE BRIGHT: Reverse proof finish allows the leaves and the gold pan to shine bright on the reverse. AN ANNUAL TRADITION OF INNOVATION: The maple leaf is always present, but each year, our gold fractional set is distinguished by a different feature or technology.

The 2021 gold fractional set is the first to feature a gold grain on a coin. LOW WORLDWIDE MINTAGE: Your pure gold fractional set has a low mintage of just 500 sets worldwide. SERIALIZED CERTIFICATE: Your fractional coin set includes a serialized certificate. Design: Each coin's reverse features two sugar maple (Acer saccharum)leaves that represent Canada. Along with the double dates ("1896" "2021") that commemorate the 125th anniversary of the Klondike Gold Rush, each one includes a gold pan privy mark that symbolizes the 1896 gold discovery on Bonanza Creek. The gold pan on the 1 oz. Coin is topped with a genuine Canadian gold grain from the Royal Canadian Mint's refinery.

The obverse features the effigy of Her Majesty Queen Elizabeth II by Susanna Blunt. Did you know It was 125 years ago that the first glittering pieces of gold were discovered in a small stream south of the Klondike River. News of this discovery set off one of the most famous gold rushes in world history.

Thousands caught gold fever and poured into the Yukon district of the North-West Territories, all hoping to strike it rich. But that sudden influx of stampeders and adventure-seekers left an indelible mark on Canadian history and forever changed Yukon, which was recognized as a separate territory in 1898. The Klondike Gold Rush is an important chapter in Canadian history, and in the history of the Royal Canadian Mint too! The events in Yukon led to renewed calls for a Dominion mint that could convert Canadian-mined metals into coins. It took a few years for the idea to become reality, but the Ottawa branch of the Royal Mint officially opened on January 2, 1908.

At the height of the gold rush, nearby Dawson City had become the largest Canadian community west of Winnipeg. It was Yukon's territorial capital from 1898 to 1953. Did you know the Royal Canadian Mint has had its own refinery since 1911? The Canadian gold grain on the 1 oz.

Coin was refined in our Ottawa facility. It contains responsibly sourced, Canadian-mined gold that was processed by the Mint using specialized, segregated refining techniques. Packaging: Your coins are individually encapsulated and presented in a single Royal Canadian Mint-branded clamshell with a black beauty box. The item "Canada 2021 125th Anniversary Klondike Gold Rush. 999 Pure Gold Fractional Set" is in sale since Sunday, March 7, 2021. This item is in the category "Coins & Paper Money\Coins\ Canada\Commemorative". The seller is "skovac" and is located in Toronto, Ontario. This item can be shipped worldwide.